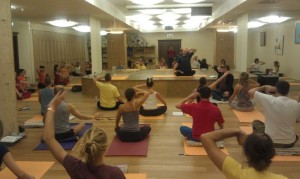 It was quite a fresh early November morning in Moscow, the 16th of November 2011, when Fabio arrived from the warm beautiful island of Tenerife, in the Canary Islands. That morning the traffic was not so bad and quite soon Marina and I drove Fabio to the place where he would stay for the next two weeks in the central part of Moscow, just two or three kilometers north of the Kremlin. This place had been chosen because it was near the Yoga Federation Center, where the two courses were scheduled to take place. Both courses were organized according to Khyentse Yeshe’s advice and in collaboration with the Yoga Federation of Moscow for those who were interested in learning a bit about Tibetan Yantra Yoga and Fabio’s ground-breaking complete breathing and relaxation techniques.

Fabio had just one day to rest and adjust to the climate before the first course began, which was about the correct way of developing complete, relaxed breathing in our daily life. Fabio taught and I translated for him. With his open-hearted way of teaching and very good sense of humor, Fabio helped people become more relaxed and open to each other, and at the same time more aware of what they were learning during the course. People suddenly discovered very simple and essential things about their everyday way of breathing that they always knew, but were just not aware how to use correctly. In addition, they really enjoyed the half-hour sessions of relaxation using complete breathing. Sometimes they didn’t even want to stop! This course took four days altogether.

Then after a three-day break the second course started, which was dedicated to the Tibetan tradition of Yantra Yoga. The course was open to all interested in the theory and practice of Yantra Yoga, but it was especially steered towards existing instructors of other styles of yoga who were interested in becoming Yantra Yoga teachers in the future.

The training was very intensive with three-hour sessions twice a day over nine days. During this period students had a wonderful possibility to completely learn Yantra Yoga from the very beginning, from the nine purification breathings and warm-ups to all twenty-five basic yantras and the base of rhythmic breathing. There were about thirty people there.

Besides explaining and demonstrating, Fabio tried to give personal attention to every participant. Knowing how intense the program would be, Fabio invited two of his senior students who are already Yantra Yoga teachers to assist him in teaching the course. Maxim Leshchenko and Katia Stepanova expertly helped Fabio demonstrate the yantras and check and correct the students’ execution. 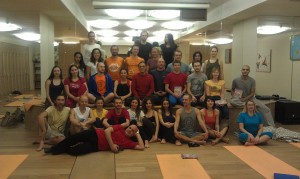 In short, students discovered a very unusual form of yoga: Yantra Yoga, in which breathing and holding of the breath play a main role and actively rule the way that our body moves. Students had a chance to learn, experience, and apply this knowledge. For many, this was really a discovery! Hopefully, in the future some of these students will become teachers that will help spread this valuable knowledge to many others! The participants were happy and the Moscow Yoga Federation is gladly willing to continue offering this type of course on a regular basis. It seems that everything went perfectly!