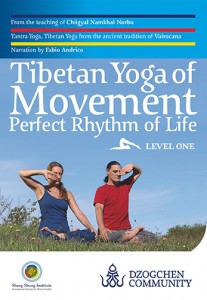 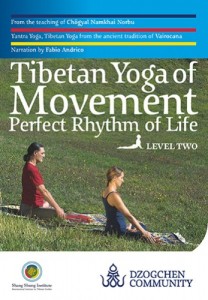 Conway, MA – October 15, 2011 – The newly released DVD set “Tibetan Yoga of Movement: Level One” and “Tibetan Yoga of Movement: Level Two” is a 2 volume, 4-disc set that covers a full spectrum of Yantra Yoga.  Senior Instructors Fabio Andrico and Laura Evangelisti, together with other Yantra Yoga practitioners, present traditional Yantra Yoga as they learned it from Dzogchen Master Chögyal Namkhai Norbu. Shot on location at the Temple of the Great Liberation in Arcidosso, Italy, this two-part series is meant as an inspiration to begin, renew, continue, and deepen daily yoga practice with qualified teachers. Viewers see Yantra Yoga practitioners gracefully yet powerfully move through this dynamic and unique system of Tibetan Yoga, as they get a taste of its deep and lasting physical, emotional, and spiritual benefits.

Each volume contains two discs: the first features detailed instruction in the movements, while the second is to follow during practice.

includes beginning instruction on the three preliminary series, as well as the First Series of Yantras. Specific attention is placed on the way to begin and end a practice session.

Movements covered in Level One include:

is designed for those already proficient at the first level, includes instruction on the remaining four series of Yantras and the Pranayama of Rhythmic Breathing.

Movements covered in Level Two include:

Yantra Yoga is one of the oldest recorded systems of yoga in the world. Its unique series of positions and movements, combined with conscious breathing, can help coordinate and harmonize one’s vital energy so that the mind can relax and find its authentic balance. Yantra Yoga contains a wide range of movements that can be applied by everyone, and it is a superb method to attain optimal health, relaxation, and balance.

About Fabio Andrico, Narrator: Fabio Andrico has been teaching yoga internationally for over 30 years. He is famous for using great skill, clear precision, and delightful humor to help students deepen their practice and understanding of yoga. Andrico began his career in the mid-seventies, when he studied Sivananda Yoga during a trip to India. In the following years, Andrico was exposed to many different yoga traditions. He ultimately met his teacher, Dzogchen Master Chögyal Namkhai Norbu, and had the rare opportunity to learn the Tibetan tradition of Yantra Yoga directly from this lineage holder. Andrico is both a Hatha Yoga and Yantra Yoga instructor, as well as an authorized trainer of Yantra Yoga teachers. He teaches Yantra Yoga internationally to groups of up to 700 participants in venue on six continents. Fabio Andrico has appeared in yoga DVDs worldwide, including  “The Eight Movements of Yantra Yoga”   and   “Breathe: The Perfect Harmony of Breathing,”   and collaborated on the best-selling book,  “Yantra Yoga: the Tibetan Yoga of Movement.”