Useful Links to our Friends & Affiliates

is made up of those who are interested in following and practicing the Dzogchen teachings. It was founded by Chögyal Namkhai Norbu in Italy in the second half of the seventies and rapidly developed in various countries around the world, taking on a completely international dimension. Today the Dzogchen Community has thousands of members in more than 40 countries.

The Community’s organization is also the result of Chögyal Namkhai Norbu’s vision: the Gars (the larger centers) and the Lings (the smaller centers) form a great Mandala (“circle”) which unites the different geographical areas of the world. Symbolically the Mandala represents, in this particular case, the places where the teaching is practiced. Within the vision of the Mandala there are no hierarchical relationships among the various Gars or Lings, or between Gars and Lings, but only a relationship of collaboration and cooperation. The Gars are linked to the Lings, which represent the fundamental core of the Community. Many of the Lings are located in large cities (such as Rome, Barcelona, New York and Moscow). 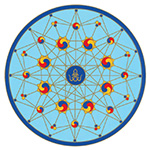 The International Shang Shung Institute was founded in Italy in 1989 by Chögyal Namkhai Norbu. Its aim is to deepen the knowledge and understanding of Tibetan cultural traditions in order to ensure their survival and preservation. The International Shang Shung Institute currently has five main branches, located in Italy, USA, Austria, the UK, and Russia, which work together as one to promote all initiatives to this end.

A.S.I.A. was created following a series of expeditions to India and Nepal (in 1978) and Tibet (in 1981 and 1988) by Prof. Chögyal Namkhai Norbu and a group of his students. All were struck by the difficult economic and social conditions in which Tibetans lived and by the sharp decline of the traditional language and culture following the Chinese cultural revolution. In 1988, Prof. Chögyal Namkhai Norbu and his students founded A.S.I.A. (Association for International Solidarity in Asia), to preserve Tibetan culture and sustain the economic, social and cultural development both of the Tibetans still in China and of the refugees in India and Nepal.