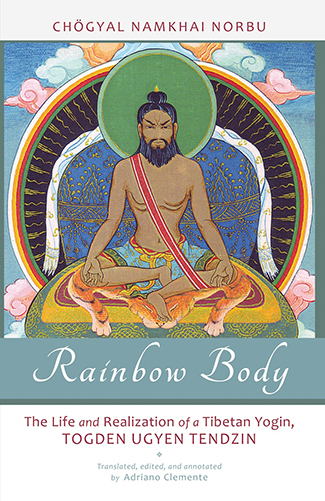 The great Dzogchen Master Chögyal Namkhai Norbu received extensive personal training and understanding of Yantra Yoga directly from his uncle, Togden Ugyen Tendzin, who was a yogi and an excellent practitioner of Yantra. This book holds the fascinating biography of Togden as written by his nephew Chögyal Namkhai Norbu, based on extensive notes the author took while visiting his uncle in 1954 in Derge, as well as on information he received after Togden’s death from Sala Karma Samten (1919-1993).

This book traces the life story of twentieth-century Tibetan yogin, the Togden (a title which means “endowed with realization”) Ugyen Tendzin (1888-1962), whose amazing achievement of the rainbow body was witnessed in Eastern Tibet not only by his countrymen, but also, to their confusion and dismay, by the Chinese officers who were responsible for his imprisonment.

The rainbow body is one of the highest attainments of Dzogchen, an ancient path recognized as the supreme vehicle of Tibetan Buddhism. It is accomplished by transmitting one’s physical constituents into the essence of the five elements, and as a result no material body remains after death.